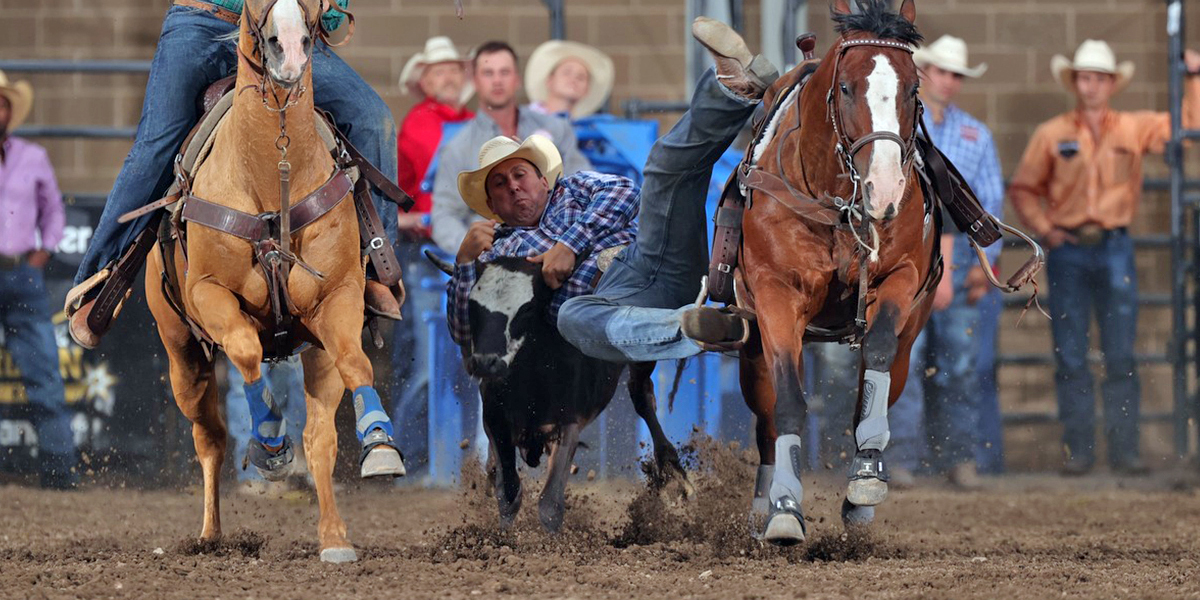 Rodeo Royal Riley Duvall grew up in the company of greatness in Checotah, Oklahoma—a tiny town best known for being both the Steer Wrestling Capital of the World and hometown of country music superstar Carrie Underwood. He’s earned all sorts of accolades in the rodeo arena, and with a blazing 4.13-second run Wednesday evening at the $562,500 Days of ’47 Cowboy Games & Rodeo now has a shot at a gold medal here Saturday night in Salt Lake City.

“I don’t feel pressure because of my family, but I did have a great opportunity growing up with my last name,” said three-time Wrangler National Finals Rodeo steer wrestler Riley. “Being from a family like mine (which includes great uncle Roy “The Legend” Duvall, Grandpa Bill, Dad Sam and Uncle Spud) doesn’t make me automatically win, but there was a lot of competition with guys like Roy, Bill, Sam, Spud, Ote (Berry), Teddy (Johnson), Rickey Huddleston and Jim White all right there in our home arena when I was a kid. A lot of guys, like Dean Gorsuch, Mickey Gee and Stockton Graves, stopped to practice when they were passing through, too. I got to watch the best from a young age, and that was good motivation to work hard.”

Pretty cool cowboy cats as family, friends and neighbors, and the bro code started by those buddy groups back in the day lives on. Bulldoggers remain notorious for sticking together and helping each other out.

“Bulldoggers really are the best,” Riley said. “Everybody looks out for their brothers, and we help each other however we can.”

That’s a fact. Trever Nelson let Riley ride his bulldogging horse Dr. Pepper, and Shane Frey and Riley hazed for each other on Riley’s horse Cash.

“Bulldogging’s like a big fraternity,” Riley said. “We all pull for each other more than any other event. Bulldoggers are basically good old country boys who have each other’s backs.”

There are a bunch of good ones who made a point to be here for this week’s Cowboy Games. Why?

“We’re here because it pays $25,000 to win it,” noted Duvall, who pocketed $2,100 last night, between the $1,600 he won and $500 appearance fee. The World Champions Rodeo Alliance’s #AllForRodeo motto is also evident in contestants paying no entry fees here. “It’d be kind of hard to miss this rodeo when we’re here for Spanish Fork (Utah), Odgen (Utah) and Nampa (Idaho) anyway.

“$25,000 will lure anyone in, and it’s pretty easy to get qualified to come run at this big money. This is the first year I’ve tried the WCRA, and it’s been good to me. I guess I just really don’t see a downside to more money for cowboys.”