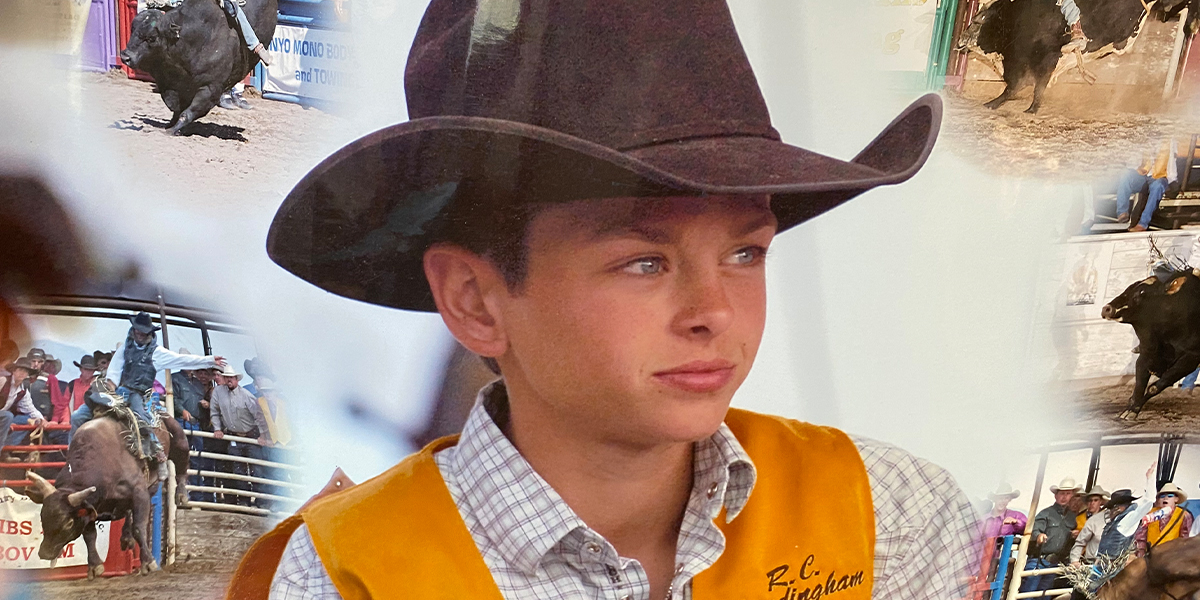 RC Landingham lives on a remote ranch in Hat Creek, California. Not many neighbors around to know him, and he’s as humble a cowboy as you’ll ever meet, so there will be no bragging. The best shot you have of hearing anything out of this guy is to listen to his spurs singing in sync with the fringe flying on those signature yellow chaps of his. Very few people have had the chance to really get to know RC Landingham. But because you’re about to watch him ride for $1 million, you really should know about his rocky ride up the rodeo ranks. This quiet cowboy is worth knowing.

“Ty was all about the Western lifestyle—horses and rodeo,” remembers RC, who’s 32 now. “If it wasn’t for him, I probably wouldn’t be rodeoing now.”

“I kind of got tipped out away from my hand,” he remembers. “My rope slid, and I was hung up. He stomped on me. Ripped my vest off. Broke a bunch of ribs. Fractured my back and my shoulder. Lacerated my liver. Collapsed a lung. Thank God, (bullfighter) Dusty Tuckness was around, because he saved me that day.”

Landingham got on about 10 bulls after that, then put his bull riding career behind him. He qualified for the 2010 College National Finals Rodeo, and took a pass. Career chapter closed.

RC finally got healed up from that catastrophic crash course in Houston, and here came another sucker punch. In May of 2011, it was a car wreck that dealt him the next devastating blow.

“I was driving on a windy road on the outskirts of Pendleton, hit some gravel, the gravel pulled me off the road and I hit a tree,” he said. “It completely crushed the car, and shattered my left leg. It broke two bones in my riding hand, and they had to cut a big chunk of my triceps muscle out, because it was just shredded from glass. I had glass all in my face. I woke up two days later in Portland at the hospital. That wreck kept me out of the arena about a year and a half.”

Landingam spent most of 2012 rehabilitating his broken body. But the worst was yet to come. In 2013, his beloved mom, Wendy, was diagnosed with ovarian cancer just after the same dreaded disease took her mom and RC’s grandma way too soon.

“It was pretty rough getting that news,” he remembers of the thunderbolt to his heart. “My mom was a wonderful person and a wonderful lady. If you ever met her, you felt like you’d known her forever. She took my rodeo buddies in like they were her own. She cooked for us, and did everybody’s laundry. You couldn’t ask for a better mother or a better woman.”

It was the perfect sad pairing to go with RC finishing the 2013 and ’14 rodeo seasons in the 16th-place heartbreak hole—one out of the Top-15 cut that leads to Rodeo’s Super Bowl, the Wrangler National Finals Rodeo. RC fought for the dreams he and Wendy shared for his cowboy career, and he helped her fight for her life.

“As cowboys, the dream and goal as kids is to make the NFR and be a world champion,” he said. “There was nothing going to stop me from trying. Watching Mom go through her daily battle with cancer got rid of any excuse I could have come up with.”

RC rallied to qualify for his first of now four NFRs in 2016. He made it just in time for Wendy to enjoy the ride with him.

“It was really emotional for me, just getting my (first NFR) back number,” he remembers. “It was like, ‘Wow, we’re finally here. We made it.’ Thank God Mom got to be there with me. I think I put way too much pressure on myself going into my first Finals, because I completely embarrassed myself in the first round. It was probably worth it, though, because I cleared my mind and enjoyed the rest of it.

“The rest of the nine days turned into a good Finals, and Mom had as much fun as she possibly could. She had switched from chemo to a chemo pill, so she could get through the NFR. And she got to be there to see me win the 10th round on Pickett’s Top Flight. That’s the last horse she ever got to watch me ride.”

After a courageous four-year fight–with her loyal son and his little sister, Sydney, by her side–Wendy died on February 3, 2017. RC had to dig deep to fight his way back to the Finals that year in her honor.

“After Mom passed away, we had her memorial and I took some time,” he said. “I stayed home for about a month. Then we headed out to San Antonio, and got after it. I knew that’s what she’d want me to do. I went to San Antonio and did good there, then did good at Houston. I had the best winter run I’d ever had, and won the RAM National Circuit Finals (Rodeo) that spring.”

“We went down to Ramona, California for a little circuit rodeo during Redding, just to get our circuit count, and I had a horse fall over and dislocate my (left, free-arm) shoulder,” he said. “I went to the Champions Challenge the next night in Redding, and was fortunate enough to win that.

“I had every intention of going full force, but I got on five or six more horses that next month, and my shoulder kept getting looser and looser. It eventually started coming out (of the socket). I rodeoed through Reno, and in June it came out all the way. I took a couple weeks off, then went to a couple rodeos over the Fourth of July. It came out on both horses I got on. I knew it was time to either have surgery or take a break until the Finals.”

RC went home to Hat Creek, and married the love of his life, Bliss Bidwell. He took stem-cell treatments to try and speed up the healing in his shoulder, and got bumped down to the bottom of the Top-15 world standings.

“I went to some rodeos that fall just to try and stay in the Top 15,” said RC, who did get that done and competed at his second NFR that December in 2017. “I placed in one round at the NFR (and finished 15th in the world), then came home and had shoulder surgery in January of 2018. He finished 120th in the world in 2018, but even that’s misleading, as his only earnings were won before that first surgery in the fall of 2017, in the late going such that that money counted toward 2018. Landingham sat out the entire 2018 calendar year.

It was more of the same in 2019. He rodeoed until June, when the shoulder came out again and he had to have a second surgery on it. There was a third surgery on that same shoulder, after a screw and a chunk of bone broke off inside the joint.

“Those three years (2018-20) were really hard for everybody,” he said. “I didn’t know if I was going to be able to keep competing, especially at this level. We didn’t know what was next, and when you’re having one surgery after another it’s really tough financially.

“All the injuries and surgeries were really hard in all kinds of ways. There were a lot of days I thought, ‘I’ve got to do something else. I can’t keep tearing myself up like this.’ But Bliss was always there to support me, and kept pushing me to keep going.”

Physically beat down and bruised, and mentally exhausted, RC finally returned to riding again in February of 2021. He’s hit new heights in this comeback, which has included back-to-back return NFR trips in 2021-22. Landingham just had a $116,172 week in Las Vegas, where he won Round 5, placed in four other rounds, finished fourth in the NFR average and fifth in the world.

RC and Bliss welcomed baby boy Wynn into the world on June 11, 2021, and he won the 2021 Pendleton Round-Up in a town with so many fond family memories in it. Stepdad Skiver used to help Randy Severe tool the Pendleton saddles, and the 2021 Round-Up saddles were the last Severe built before we lost him to COVID later that fall.

“I feel like I’ve been riding better than I ever have, and am definitely having more success than ever before,” RC said. “I’ve been pushing harder for my family, and the angels above.

“Becoming a dad has been the biggest change for me in the last couple years. In the past, I rodeoed for myself. I have a family that relies on me now, so my work ethic and entire lifestyle has changed. Just the way I manage my life now is reflected in my career.”

Fast forward to right here at Cowtown Christmas in the historic Fort Worth Stockyards, where Landingham finds himself with a shot at being the World Champions Rodeo Alliance’s first-ever $1 million Triple Crown of Rodeo winner. Because he won Rodeo Corpus Christi in Texas last May, then the Days of ’47 Rodeo in Salt Lake City in July, RC is one win away from a life-changing check—one million-dollar check that would match all the others in his career combined.

“You have a chance to win a large amount of money in a small amount of time on a minimum amount of bucking horses at every WCRA event you go to,” he said. “So I really don’t understand why anyone wouldn’t be here.

Thank God for that, and good luck, RC!