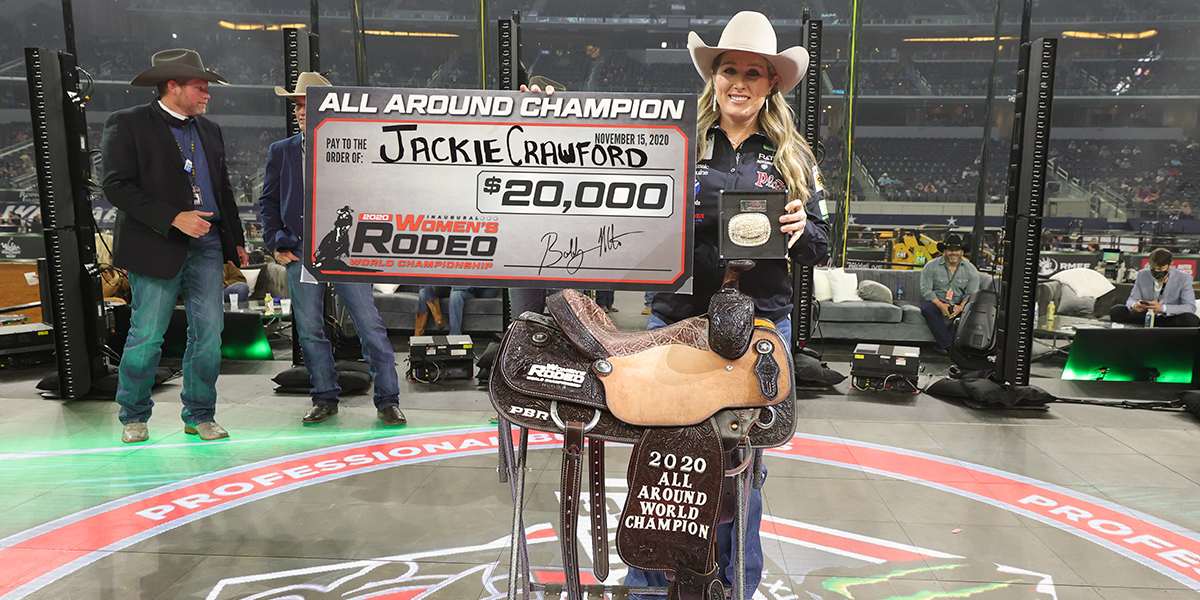 In front of electrifying crowds inside AT&T Stadium, five women became the first in history to claim the coveted title of Women’s Rodeo World Champion and took home a minimum of $60,000 each. The seven-day $750,000 equal money championship event dished out equal money to the 254 entered athletes, paying an average of $2400 per check.

As the first discipline of the championship round, team roping had fans inside the home of the NFL’s Dallas Cowboys on the edge of their seat Friday night throughout the action-packed performance where challengers prevailed. After no qualified times in the first four runs of the performance, the team roping duo Rylie Smith (Whitsett, Texas) and Hope Thompson (Abilene, Texas) backed into the box calm and collected and logged the only qualified run of the night with a 13.66-second effort. With only one qualified run in the team roping, all athletes who did not record a qualified time were paid a $5,000 appearance fee, adding an additional $30,000 EACH in ground money to Smith and Thompson’s payday. The Texas natives took home $90,000 individually, a Jesse Jaymes Silversmith’s buckle and a Women’s Rodeo World Champion Title.

As the championship round continued on Saturday evening, a hotly contested battle in the barrel racing began to unfurl. Fifteen-year-old Jada Trosper (Ponder, Texas) led the pack with a 15.582-second run edging out Ivy Saebens (Nowata, Oklahoma) and Randee Prindle (Gilman City, Montana). Four-time WCRA Major qualifier and No. 1 athlete on the WCRA W20 Leaderboard Hallie Hanssen (Hermosa, South Dakota) and mare Vida expertly navigated the course as her 14.735-second run was the quickest, distancing runner-up Jessie Telford (Caldwell, ID) who recorded a 15.339-second run. Hanssen earned a total of $60,000 in only three runs as she was seeded directly in the main event.

In Breakaway roping Sunday Night, 18-year-old Madison Outhier (Utopia, Texas) was the undeniable star of the discipline, delivering what would be the most groundbreaking performance of the event. As the quickest athlete to earn a qualified time, her 2.05-second effort elevated her to a $60,000 payday. For Outhier, the event marked her career first WCRA Championship, advancing to the main event through the Leaderboard Pool. Not only did Outhier emerge victorious, but did so by defeating WCRA Royal City Roundup Champion, Kelsie Chace (Dublin, Texas) who logged a 3.43 second time. Outhier also defeated Kanas State High School Breakaway Roping Champion Beau Peterson’s(Council Grove, Kansas) 2.14-second time.

Legendary cowgirl Jackie Crawford (Stephenville, Texas) earned the first-ever Women’s Rodeo World Champion All-Around Cowgirl title. She won a $20,000 bonus and a custom saddle donated by Coats Saddlery, after earning 1,520 points during the seven-day event along with nearly $15,000 in additional prize money. The 38-year-old cowgirl, who has over $135,000 in career-earnings with the WCRA, made history in Chicago during the WCRA Windy City Roundup becoming the first women breakaway roper to win $50,000 in prize money.

WCRA and PBR have announced the 2021 Women’s Rodeo World Championship will take place in Las Vegas at South Point Arena alongside the PBR World Finals. Nominations for the November 2021 event (leaderboard W21) are underway.

Championship Round Results below while photos of the event can be found here. Please find all round results HERE.

With the Conclusion of the Women’s Rodeo World Championship, the WCRA and its partners have awarded more than $8,500,000 in new money to rodeo athletes since May of 2018.

Fans can relive all the action from the Women’s Rodeo World Championship on RidePass, at RidePass.com or via the RidePass app available on iOS, Android and Roku.